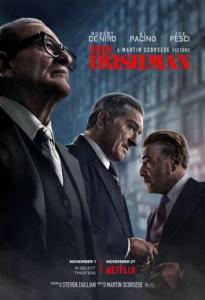 Towards the end of Martin Scorsese’s blockbuster film The Irishman, former hitman Frank Sheeran (Robert De Niro), now resident in a care home and confined to a wheelchair, is visited by two young FBI agents who are hoping for the last word on the fate of Jimmy Hoffa (Al Pacino). Sheeran refers them to his lawyer, who deals with all such issues. ‘He’s dead, Frank,’ they tell him. And in fact, they are all dead, all the mobsters, all the mobsters’ wives, the lawyers, the police, all dead. Rather than a film about racketeers and murderers, this is a film about ageing and death.

After all that he has experienced, Frank is now alone in the world, with his best friends in their graves, and his family having deserted him and moved on. His last connection with the living world is the door to his room left slightly ajar. It’s a very sad film and one that will impact those who may identify with Frank’s generation.

The performances, particularly those of De Niro and Joe Pesci are stunning. What spoils the first half of the film, however, are the flashbacks featuring the ‘young’ De Niro and Pesci in their digitally rejuvenated forms. Their faces are strangely distorted so as to appear youthful while their bodies are the inevitably thick and cumbersome shapes of the elderly. What we needed was the lean and nimble De Niro of Taxi Driver and The Godfather. What we got was an unrecognizable De Niro with blue eyes. In addition, we got an array of top-notch but ageing actors with variously fashioned and tinted toupees. Other films and series have resorted to a change of actors for different eras of their story. The Crown and the German series Dark are just two examples. For my money – if I had any – Cillian Murphy would have passed for a young Sheeran/De Niro and Tom Hardy an early Hoffa.

All that face and body stuff proved distracting and confusing through the first third of the movie. It seemed also that we were seeing ‘more of the same’ – more Goodfellas, more Casino, more The Departed, complete with an all-knowing voiceover from Frank, as though the end of all these characters were predestined. That in itself is a statement. But then the film takes off and becomes compulsive viewing in the true Scorsese tradition. How should we then interpret the ‘Wet fish on the car seat’ scene? In years to come, someone will tell us. In the meantime, it will remain one of those Scorsese vignettes, comic and yet terrible because we know something bad is about to happen. 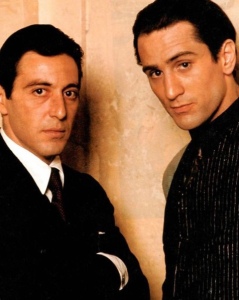 Straight talk from the sisters about blood, sweat and ink

Going where the wind blows

You are where life brings you

Taking Back the Arts

"Late" According to Whom?

THE HAM
The Friendly Editor

Thoughts and advice from an editor's desk

Reading my way around the world

A year of reading the world

Books and Writing | News and Resources